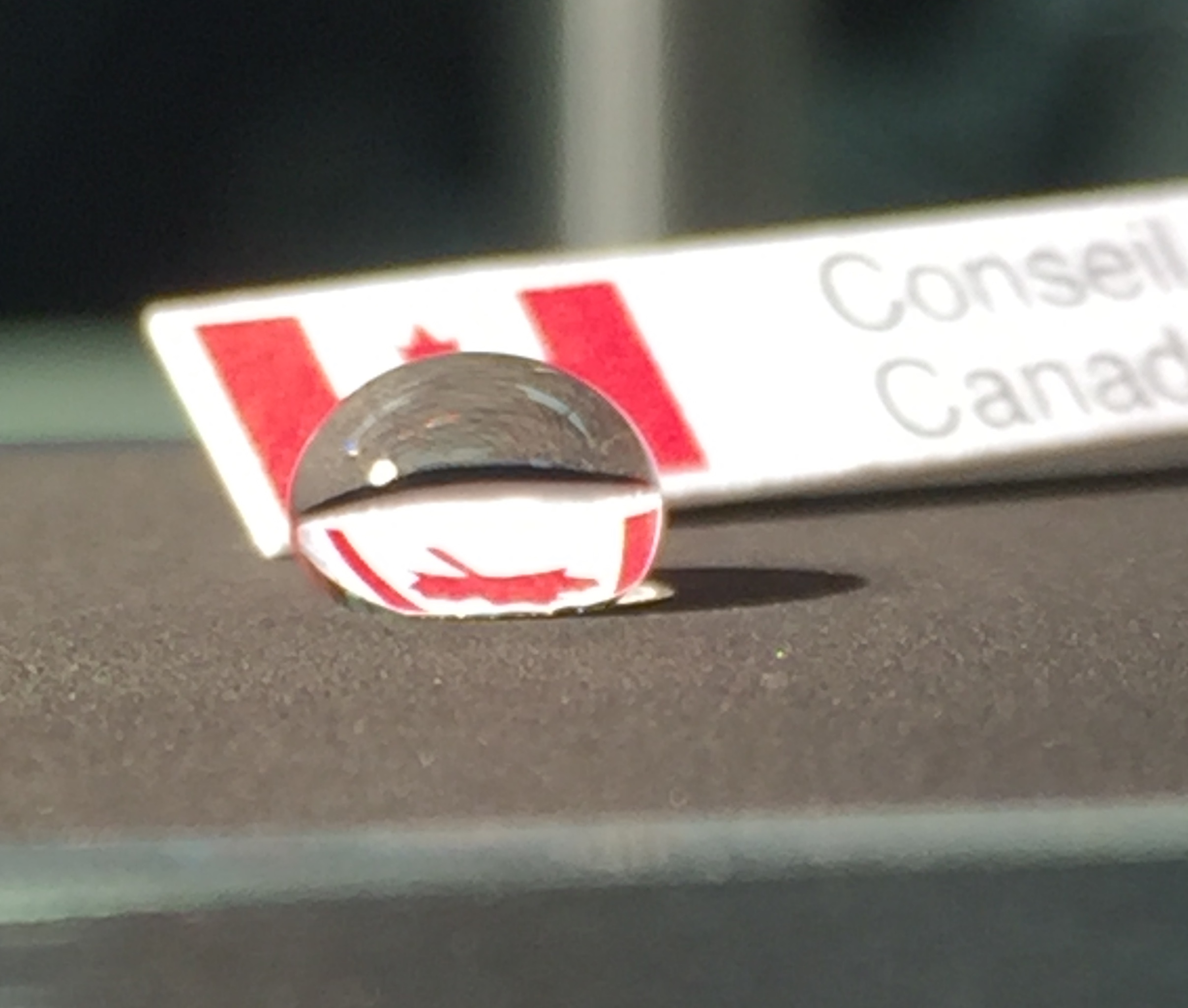 Nature is a bountiful source of inspiration to advance innovative surface functionalities, processes, and technologies for engineering materials. For example, the super-hydrophobic surface characteristic of the lotus leaf can be recreated by mimicking the microstructure and surface energy on stainless steels. This super-hydrophobic behavior, which causes water to roll off the lotus leaf while collecting dust particles, enables the self-cleaning of the leaf surface and is primarily due to the hierarchical conical structures, as well as the wax layer present on the leaf surface. A good understanding of the surface topography of the microstructures, water droplet contact angle, and surface chemical composition provides the important clues necessary for the creation of artificial super-hydrophobic or superhydrophilic surfaces and using state-of-the-art ultrafast laser ablation treatment.

Controlling the wettability of a material surface for superhydrophobic or superhydrophilic performance has been an interesting area where numerous different methods are being pursued. While many coatings and thin-films are able to achieve extremely high or low wettability, their endurance life, chemical compatibility, and large area scalability make them less attractive for manufacturing environments. Meanwhile, ultrafast pulsed lasers with several megahertz pulse repetition rates can tune the wettability of a surface without changing its chemical composition and offers higher endurance lives. This is accomplished by instant vaporization (laser ablation) of the material in specific micro-scale patterns thus creating structures that changes the way the surface topography interacts with water.

A superhydrophobic surface is characterized by its ability to repel water using structures that are akin to a bed of nails allowing the water droplet to rest only on the peaks using surface tension and therefore repel from the surface (see Fig.1). Contrarily, a superhydrophilic surface is characterized by its ability to attract and spread the water so features a series of channels that trap water and wick it away using micro-capillary forces. Such surface functionalization techniques have been developed at Canada’s National Research Council for stainless steel (304 SS) and Silicon Carbide (SiC) surfaces respectively to demonstrate the effectiveness of laser texturing technology for wettability control of common engineering surfaces. Fig.2 depicts superhydrophobic performance of a bouncing water droplet at ~5° tilt on 3×3 cm2 textured area.

Experimentally, a 10 W picosecond pulsed laser operating at 1 MHz frequency was focused to a tiny spot of 25 µm diameter. The samples were mounted on a CNC motion system equipped with argon gas protective environment. The optimization of laser structuring process included varying each of the laser parameters, e.g. power, frequency, feed rate, grid pitch, etc. and evaluating the water droplet contact angle using the standard drop-shape analysis method. For the 304 SS superhydrophobic surface, a laser beam fluence of 2.61 J/cm2 was used to promote narrower, shallower features by material redistribution rather than complete vaporization, while the SiC superhydrophilic surface was realized using a much higher fluence of 10.7 J/cm2 to create thicker and deeper channels for the water to impregnate. Both surfaces were machined using the five-axis CNC micromachining system to texture grid patterns, ensuring an even distribution of micro-structures.

The superhydrophobicity of 304 SS surface was highly dependent on post-processing conditions in order to tune the wettability. Specifically, the chemical nature of the surface was reactive for 14 days after laser processing due to high-power interaction with the material which excites the chemical state. The samples were thus stored in different environments and exhibited vastly different contact angles. Most notably, the sample which was submerged in deionized water showed hydrophilic tendencies while the sample kept in extremely dry (<8% relative humidity) air was highly superhydrophobic with a contact angle of 152º. Following this two week period, the sample attained stable chemical equilibrium and the wettability was unchanged regardless of environment.

The superhydrophilic SiC surface on the other hand was not as reactive and therefore showed a contact angle of 0º immediately after processing. As aforementioned this sample was intended to have wider and deeper channels to hold and wick the water away from the contact point. The micro-capillary forces that are responsible for spreading the water across the surface were strong enough even to counter gravity; Figure 3 shown below depicts a time-lapse of a 3×3 cm2 textured area placed vertically with the bottom edge in water. Within a 10-second span, the entire surface was wet by the micro-capillary forces pulling water vertically against the force of gravity.

The potential for laser texturing technologies spans many applications in manufacturing industries. Superhydrophobic surfaces have been proposed as a method to mitigate many fluid problems; by decreasing the interaction between a pipe wall and the fluid, the drag experienced by the fluid has been shown to decrease significantly in both laminar and turbulent flows. Thus far, only superhydrophobic coatings and thin-films have been tested for this application however they remain plagued by rapid wear and very short lifetimes. The robustness of the laser texturing process to achieve superhydrophobicity therefore presents exciting new opportunities. As well as water repellency of superhydrophobic surfaces, longer freezing times of water droplets and lower adhesion strength of ice to the surface are characteristics of these high contact angle surfaces and thus present an iceophobic surface property. This enables applications for machinery that operate in colder climates such as wind turbines and airplane wings and engines.

Applications for superhydrophilic surfaces are commonly based on the micro-capillary forces demonstrated as the rapid dispersion creates a thin film of water on the surface. This thin film allows for an increased rate of evaporation from the surface opening doors for anti-fogging applications or greatly increased rates of heat transfer. Other applications manipulate the thickness of the film formed which can provide antireflection ability for surfaces such as solar cells. Superhydrophilic textured surfaces also exhibit increased adhesion strength with the liquid due to the impregnation of the liquid into the surface, therefore providing applications for improvement in bonding strength of joints between different material surfaces.

The wettability control functionalization on engineering surfaces opens the door for new applications with both superhydrophobic and superhydrophilic surfaces. The robust nature of laser surface texturing technologies in combination with chemical compatibility and industrial scalability makes this method unique and most promising to deploy a wide range of functions in manufacturing products. While this technology has already provided solutions to several significant industrial tasks, many more applications are currently being explored at NRC.

More details on this topic can be found on YouTube: Combined Wettability Control (https://youtu.be/7IW2aC_rkjw), Super-hydrophobic Bouncing (https://youtu.be/b1vXDuvf3aQ), Super-hydrophilic Ceramic (https://youtu.be/9ZCcW4cOccw), along with other presentations on NRC’s micro/nano-machining capabilities. Further details on these studies can be found in: Superhydrophobic and superhydrophilic functionalized surfaces by picosecond laser texturing. Journal of Laser Applications 30, 032505 (2018); https://doi.org/10.2351/1.5040641