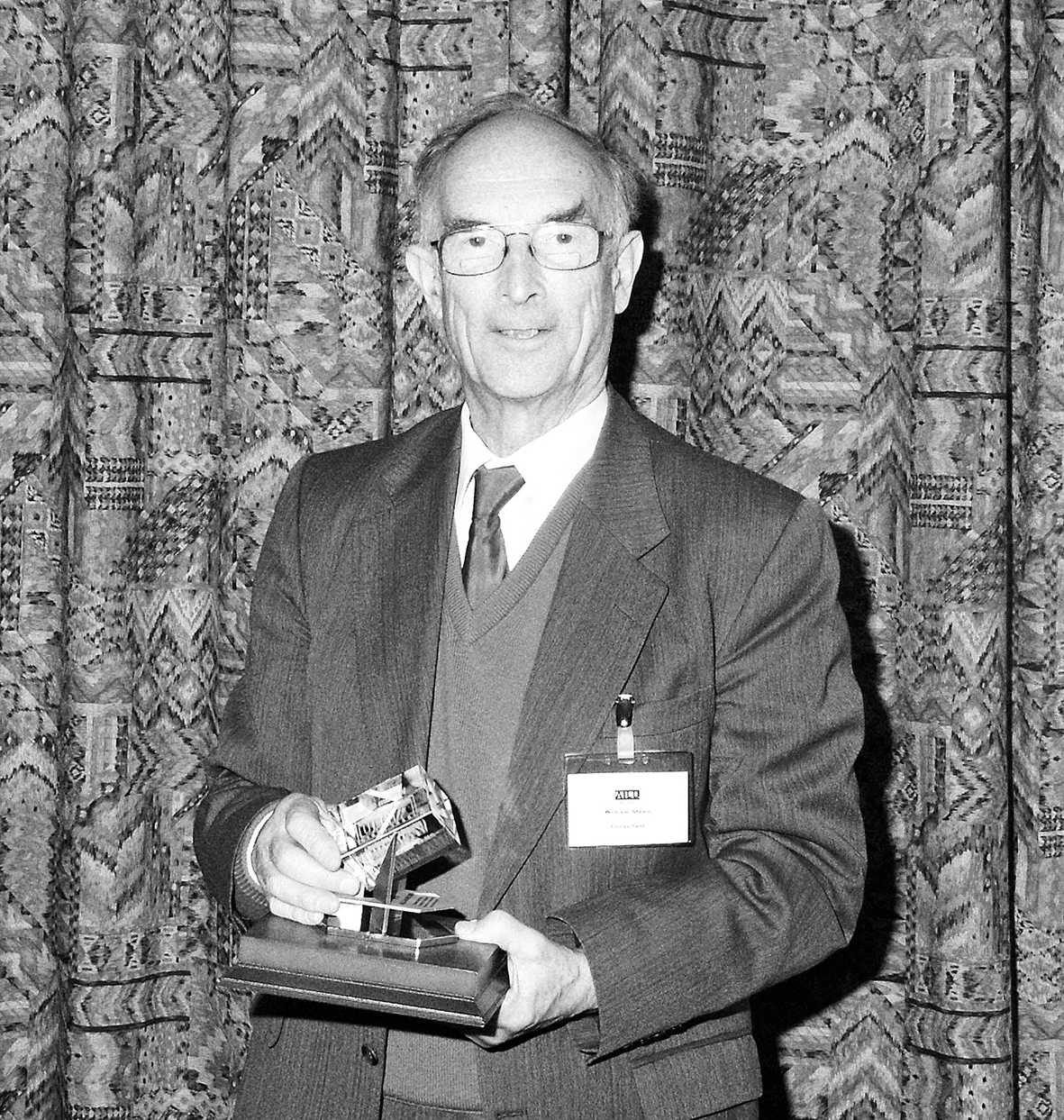 The LIA has introduced a set of annual awards dedicated to Professor William Maxwell Steen, a veteran and pioneer of laser technology.

This year the Laser Institute (LIA) announced a new set of awards that it plans to confer annually to user organisations that demonstrate significant innovation in the use of lasers for advanced materials processing. Finalists and recipients of the awards will present their innovations at the International Congress on Applications of Lasers & Electro-Optics (ICALEO) on 7-10 October.

The awards will be conferred across each of the following industries: aerospace; automotive; medical devices; microelectronics; specialised manufacturing and services; research and development; life sciences; defense; academic and public sector.

Steen, in addition to founding the world’s first university-based research group in laser material processing at Imperial College London in 1968, can be accredited with the invention of laser chemical vapour deposition, laser arc hybrid welding, and with his research group, the development of blown powder laser cladding and laser direct casting – processes which formed the foundation of laser additive manufacturing for metallic materials, more commonly known today as 3D printing.

He also co-founded the Association of Industrial Laser Users (AILU) in 1995 and served as its president for the first eight years. In addition, in 1997 Steen was the first European to be awarded the Arthur Schawlow Award by LIA, and at ICALEO 2008 there was a tribute session to his lifetime achievements. He has a laboratory named after him at the University of Vigo, Spain, and has received a medal from Pelacky University in Oloumouc, Czech Republic, for his pioneering work on lasers.

On hearing the announcement of the new award, Laser Systems Europe approached Steen to find out more about his many experiences exploring the realm of laser technology.

When did you first begin working in laser technology?

In 1964 I was appointed lecturer at Imperial College London in process metallurgy. I became interested in metal extraction by volatile compounds, such as chlorides, and this led to trying to make patterns by depositing metal from volatile compounds, such as nickel carbonyl. I realized that the pattern created using shaped jets on hot plates was very blurred, and thus needed to make a shaped hot spot. I bought a glass tube with mirror mounts from Ealing Scientific, built my own power supply and I had a very unstable 5W CO2 laser on which I invented the process of laser chemical vapour deposition (LCVD), which worked but obviously needed more power.

In working this up I won a contract for the first industrial fast axial flow 2kW CO2 laser from BOC developed by The Welding Institute (TWI). That gave me the most powerful university-based laser in the UK. Students and contracts flowed from this with the wide-open space for research using this entirely new form of industrial energy.

The very early years were dominated by numerous small start-up laser companies wishing to sell their lasers and compete to find useful applications at sensible prices, this was the main challenge – a solution looking for a problem. Cutting and welding were the only applications at that time with some curious results.

Martin Adams, at TWI, was publishing cutting figures significantly better than everyone else, but because of the atmosphere of competition, this was explained as commercial optimism. Later we came to realise he was able to cut nearly twice as fast as others because TWI had not the space for the cutting table other than in line with the laser, and the beam polarisation favoured his layout as opposed to those with transverse tables; a feature of optical energy not fully understood in those exciting times. There were many more surprises to be found as we explored this new form of energy!

For the next 20 years or so, the reliability and ease of maintenance of lasers improved, with most industries keeping a watching brief on what was going on. I felt at the time I could go to any company and sell the idea of a laser application as a result of this interest.

In the 1990s the fibre laser arrived on the scene and the game changed. The fibre laser was smaller, required less cooling, had no alignment problems and a superb loworder mode beam. To some extent it was like a dream come true.

Today, reliability and quality are taken for granted, and the only thing holding the laser back now is cost, which is rapidly coming down as more units are required. It used to be good to see the look of awe on people’s faces when you said you worked with lasers, now it is not really regarded as unusual. In summary, the opinion of industrialists today is that the laser has arrived, and they are learning to live and work with it.

Are there any particular applications of laser technology you’ve enjoyed watching develop since your retirement in 1998?

There are many applications I have enjoyed working on, but additive manufacturing comes immediately to mind as something special – a game changer in the thinking of how to make things. In the 1980s Rolls Royce asked us to blow powder into the laser beam and so we invented the laser cladding process. It worked

so well it became similar to writing with metal, then one day one of my students, Mark McLean, repeatedly overlaid a clad line and produced a wall. One look at that wall, particularly after a metallurgical examination showed the columnar grains running up the wall instead of across the wall – as in a standard casting – showed that we had a serious new manufacturing process on our hands.

Mark went onto make a stainless-steel wine glass, and additive manufacturing was born. Students of mine over the world have now worked on this promising development.

I watch with both amazement and joy at the ingenuity of what is being done with additive manufacturing, and await the day that someone makes a hand-held device, either wire or powder-fed whereby the craft community can actually sculpt in reverse – building things up instead of chiselling material away. The precision is such that in the hands of a craftsman, stunning works of art would be created. If the price is right there would be a huge market for such equipment.

Are you satisfied with how university laser research groups around the world are interacting and collaborating?

There is quite a network of friends among my ex-students based at various institutes around the world who have a strong collaboration, while still remaining competitive, which is as it should be.

One of my main concerns is the lack of imagination at universities. It is obvious to me and others working with lasers that they are dealing with an unusual and highly flexible form of energy available in a uniquely controllable form which can be of almost unlimited power, from milliwatts to petawatts, deliverable in times ranging from continuous to femtoseconds or even less, over a huge range of wavelengths.

The applications of this energy range from material processing through to sensing, metrology, communications, medicine, fluorescence, interferometry, holography and x-rays. This is far more than electricity has to offer, and yet there are currently very few or no university departments dedicated to optical energy – amazing!

Could you give an example from you career where academia has interacted well with industry?

One of our most successful developments came from the work of Professor Lin Li – a past president of LIA and AILU now at Manchester University – who while exploring the possibility of sealing concrete by surface melting – for ease of cleaning, sterility etc – found that thermal cracking made this difficult.

In expanding the beam to try and avoid this he found that he could explosively remove the top centimetre of the surface in reasonably large lumps. Such a simple process was taken up by British Nuclear Fuels (BNFL) for scabbling the walls of radioactive tanks prior to decommissioning. Lin Li proved the process worked and BNFL developed it further at TWI and finally used it for real in their works.

This initiative of the LIA in instituting annual awards for the best developments coming from industry or universities should further enhance academia’s connectivity with industry, and it is very flattering that the LIA has named these awards after me!

Do you have any pearls of wisdom for those looking to start their own entrepreneurial laser journey?

It is certainly stimulating to watch my students set up a business. Those that succeed either need good financial backing and/or a great determination to win. For example, Dr John Powell started Laser Expertise in Nottingham with two friends, they were young, energetic and disciplined in work habits and finance. They spent within their budget by buying a second-hand laser and worked several years for very little return while they expanded the business of a laser job shop. John had a partner for finance, a partner for sales, and he himself had a talent for invention and much more. Together the three of them made a success of the company, which I believe now employs some 60 people.

So, if there is any pearl of wisdom, it is to have a belief in yourself and a determination to win, even when the going is tough. In the laser business the rewards can be great, with much excitement and potential novelty at any time.

A full version of this interview can be found online at www.lasersystemseurope.com