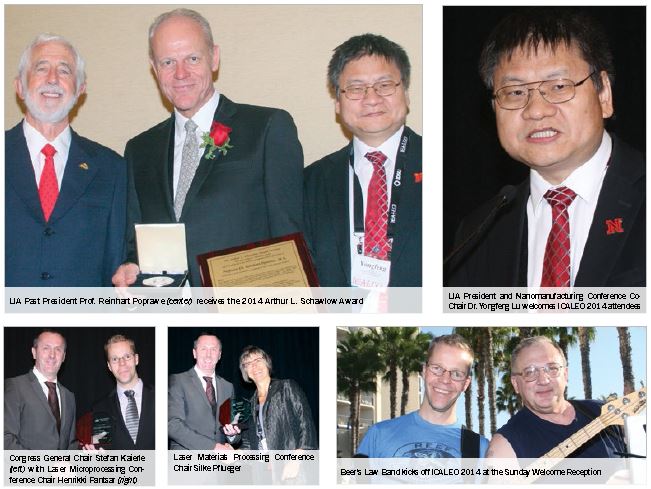 Not resting on the laurels of its flagship conference, the Laser Institute of America instituted a peer-review process for its 33rd International Congress on Applications of Lasers & Electro-Optics (ICALEO®), held Oct. 19-23 in San Diego.

For the first time, ICALEO featured presentations given even more rigorous analysis than previous events; 56 of the 61 papers submitted for peer review were accepted. “It was quite a bit of a challenge” reviewing abstracts, said returning Congress General Chair Stefan Kaierle of Laser Zentrum Hannover. “We believe it was necessary… to change the way we present our work and especially to improve the quality.” At least two people reviewed each paper in the double-blind process. About 35 to 40 papers will be published in a special edition of the Journal of Laser Applications® (JLA), he said. What is often called a laser family reunion, ICALEO featured another broad-ranging smorgasbord of laser research and experimentation spanning the traditional and the novel — from 3D patterning of cardiac cells and killing malaria carrying mosquitoes to creating more powerful bacteria-fighting nanoparticles, powering a small flying craft and improving the dyeing and patterning of textiles. Lasers are even being used to listen to colliding galaxies, black holes and dying stars.

“We rarely see a conference lasting more than three decades and still experiencing expansion,” said LIA President Yongfeng Lu in welcoming the more than 400 attendees from 30 countries. Such is ICALEO’s reputation that many attendees have participated five, 10, even 20 times. Dozens of newcomers were evident from the light-blue name tag ribbons given to first-timers, a good number of whom were presenting papers.

Other highlights of the roughly 200 presentations included: Managing Director of Fraunhofer ILT, received the Arthur L. Schawlow award at LIA’s Annual Meeting & Awards Luncheon. “LIA always has been, for me, one of the true (forces) in the global development of the laser community and technology,” he noted. Also at the meeting, outgoing President Lu handed the reins over to Robert Thomas of the US Air Force Research Laboratory for 2015 and announced Lin Li as President-Elect and Paul Denney as Secretary.

LIA Executive Director Peter Baker noted that the JLA’s impact factor — a measure of the publication’s popularity — had grown to 1.338 from 0.574. Additionally, he announced that a revamped Lasers for Manufacturing Event® (LME®) and Summit will be moved from the fall of 2015 to the spring of 2016. He also honored continued volunteer contributions to LIA efforts by Rita Lawson and Virginia Belforte.

Another development coming from this year’s ICALEO is the creation of LIA’s new Scientific Strategic Committee, Baker said, comprising roughly a half-dozen former presidents and ICALEO general chairs charged with identifying new laser technologies and applications and ensuring they are presented to LIA audiences.

At the end of the conference, Kaierle announced Silke Pflueger of DirectPhotonics as Congress General Chair of ICALEO 2015, which will be held Oct. 18-22 in Atlanta, GA. Kaierle and his conference team again put a unique stamp in ICALEO by inviting compelling opening and closing plenary speakers who reside outside the manufacturing realm. Of course, the majority of sessions focused on material handling from the macro to the micro and nanoscales.

In keeping with recent practice, the Nanomanufacturing Conference kicked off with a joint session with the Microprocessing Conference. Opening the session was a presentation on the use of a self-optimizing LCOS-SLM-based beam splitter for high-precision material processing. While average powers of ultrafast/ultrashort pulse (USP) lasers have increased, the paper noted that ablation rates haven’t scaled up concurrently “because classic beam-steering concepts like galvo scanners are too slow to deliver the laser energy to the work piece effectively.” Therefore, surface qualities have been compromised and thermal damage inflicted. A method detailed in this case used diffractive optics to increase productivity with a higher average power USP laser (50 W) by splitting the input beam into 196 beams for a drilling process in which every hole had a specific geometry. The distance between each beam was about 400 μm, and the size of each hole averaged 30 μm.

From the creation of microscale holes to the study of black holes, ICALEO 2014 deftly took attendees on a rollercoaster ride of laser applications across the spectrum of disciplines.

Opening the proceedings with the first plenary, Karsten Danzmann of the Max Planck Institute for Gravitational Physics opened eyes to the ongoing study of space with lasers. Noting that “all our knowledge about the universe really has come through light,” Danzmann updated attendees on the latest in intergalactic photonic exploration. “There’s a rule of thumb in laser interferometry: The sensitivity increases or improves by about a factor of 10 every decade,” he noted. This has allowed contemporary researchers to “listen in” on colliding galaxies, white dwarfs (dead stars) and black holes. “We now have a large heritage of lasers that are flying,” he explained. “Neodymium YAG lasers are flying on many, many missions and will be flying on even more missions,” he noted. He also detailed the laserdriven LISA Pathfinder project, scheduled to launch around July.

Coming back to earth, Shaochen Chen of the Institute of Engineering in Medicine in San Diego discussed the nanoscale 3D printing of hydrogels for engineering human tissue. Growing functioning human cells requires supporting scaffolds. “We use ultrafast lasers to control light affecting areas down to

200 or 300 nm,” he explained. “Then you can print nanoscale scaffolds,” be they multilayer or “other structures like dot arrays with… drugs inside those dots.”

In a later presentation, incoming President-Elect Li used a 400 W picosecond laser at 1064 nm wavelength to create silver titanium dioxide antibacterial nanoparticles that tested effective against E. coli. The laser-generated nanoparticles had a positive charge and outperformed “very expensive” commercial, chemically produced silver nanoparticles, which generally possess no charge. Most bacteria have a negative charge, he explained; a laser-generated nanoparticle is “like a missile” that targets bacteria faster and more effectively — and with lower toxicity to endothelial cells than distilled water. He also tested nanosecond lasers, which generated irregular-shaped and smaller nanoparticles that were “much less effective” in antibacterial function. Femtosecond lasers are being studied as well.

Other notable sessions included the opening plenary by Arty Makagon and Maclen Marvit of Intellectual Ventures Lab who are exploring the killing of mosquitoes to curb the spread of malaria in the Third World, and the closing plenary by Leonard Migliore of Laser Kinetics, who detailed novel attempts at laser-driven innovations including the drilling of holes in rice to improve cooking time.

In keeping with making the most use of each venue, ICALEO 2014 afforded attendees plenty of chances to catch up with one another, from the casual Welcome Celebration and elegant President’s Reception on the lanai at the Sheraton San Diego Hotel and Marina to the novel Laser Industry Vendor Reception & Tabletop Display at the hotel’s spacious outdoor tent. The traditional president’s morning run and Business Forum & Panel Discussion offered more opportunities to ask one-on-one questions of peers.

Whether one was a first-time attendee, first-time presenter or longtime participants, ICALEO once again opened eyes to the full spectrum of laser possibilities.

“I think the first time I attended ICALEO was 1986 in San Diego,” Li recalled. “Lots of new science and technology has been reported at this conference.”

Said Frederick Buldhaupt, a Boeing laser processing technician and returning attendee, “It’s very informative, and it’s a great way to network and meet new faces. It’s a wealth of information (and) a very good use of time.”

First-time exhibitor ALIO Industries was among the participants in Tuesday night’s vendor reception in a large tent just outside the main venue. The company came to ICALEO because “We’re doing a lot of laser work in China (and with) research centers, and we need to get more involved in the laser world,” said founder and CEO C. William Hennessey. “Some of the sessions are very good (and featured) people we know or are working with at research labs. We’re very involved in sapphire cutting, (so that was) my focus coming here.”

First-time presenters Isaac Adebiyi of Tshwane University of Technology in Pretoria, South Africa, and Stephen Tate, a graduate research assistant at the Colorado School of Mines, found ICALEO to be a revelation.

“It’s been a wonderful time,” Adebiyi noted. “I really enjoyed this gathering. I’ve learned a lot about different fields and applications. At this conference, I’ve seen that lasers are involved in applications I never thought of.” Added Tate, “It was interesting seeing a lot of the international (research) that I don’t typically get exposure to.”

Online versions of the ICALEO 2014 proceedings are available for $180 ($150 for members) at www.lia.org/store. For more information on ICALEO 2015, visit www.icaleo.org.