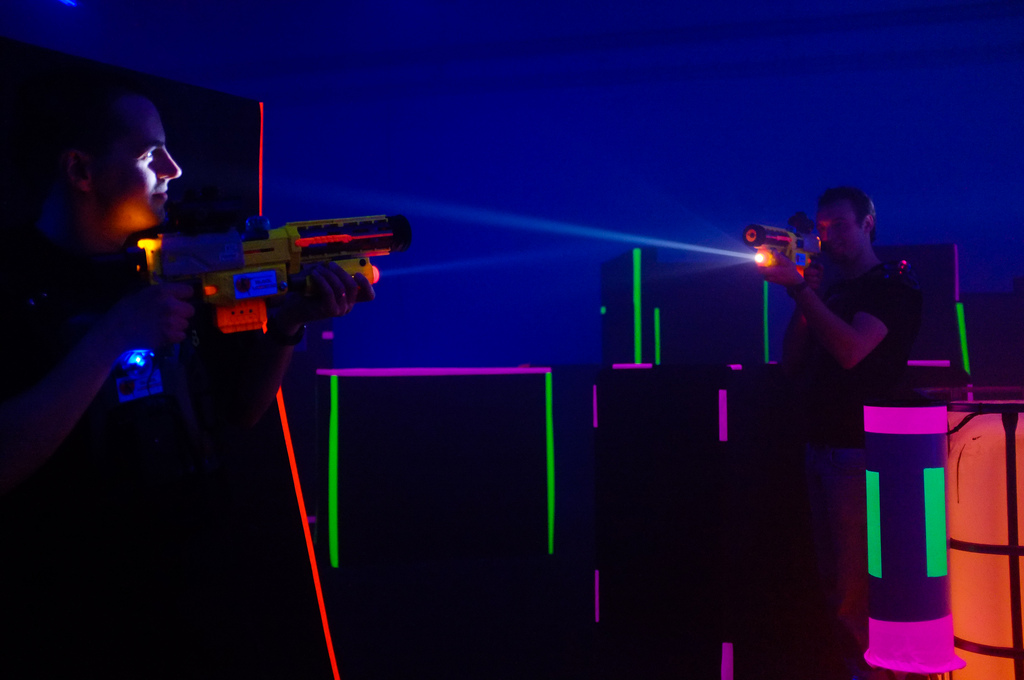 Rising in popularity in the 1990s, the game of Laser Tag has served as a staple for kids’ birthday parties, after school recreation, and most recently, a fun team building tool for corporate and company events. While most of you who are reading this have played – you may not know that the roots of laser tag are firmly set within the United States military.

Initially developed for training purposes for the Army in the 1970s and 80s, the first “toy” version of the game was released in 1979 in the form of the Star Trek Electronic Phaser Guns Set. A few years later, George Carter III got to work designing an arena based game, like the ones still found across the country today. The first center for competitive play opened shortly after, in 1984.

Over the years, the equipment and technology used in laser tag saw many different iterations and designs. In most cases, players wear a device – usually a vest – equipped with sensors that are sensitive to infrared light. The laser “guns” emit an infrared light at a wavelength that is safe for the human eye and body. The device worn by players then responds to the contact of the light, usually by buzzing or lighting up. Often times, low-powered visible lasers are also included in the gun for visual purposes.

As laser tag grew in popularity, more and more styles of play were developed, at varying levels of complexity. Some are grandiose, “capture-the-flag games,” while others play with elimination in mind. Others involve complete “missions” that tie into a story, for a fully immersive experience. In its most evolved form, the infrared light is encoded with information such as where the beam originated from and where it was received. This helps keep score at the end of a match.

More than just a family-friendly activity, laser tag competitions have taken place worldwide for over a decade. With help from the Laser Tag Museum, the laser tag industry recently celebrated its 30th anniversary.

With new concepts for laser tag popping up in theme parks, tourist attractions, and entertainment centers to this very day, here’s looking to another 30 years of laser-centric fun.

For more fun, engaging laser history, click to read our blog on the Origin of the Word Laser.