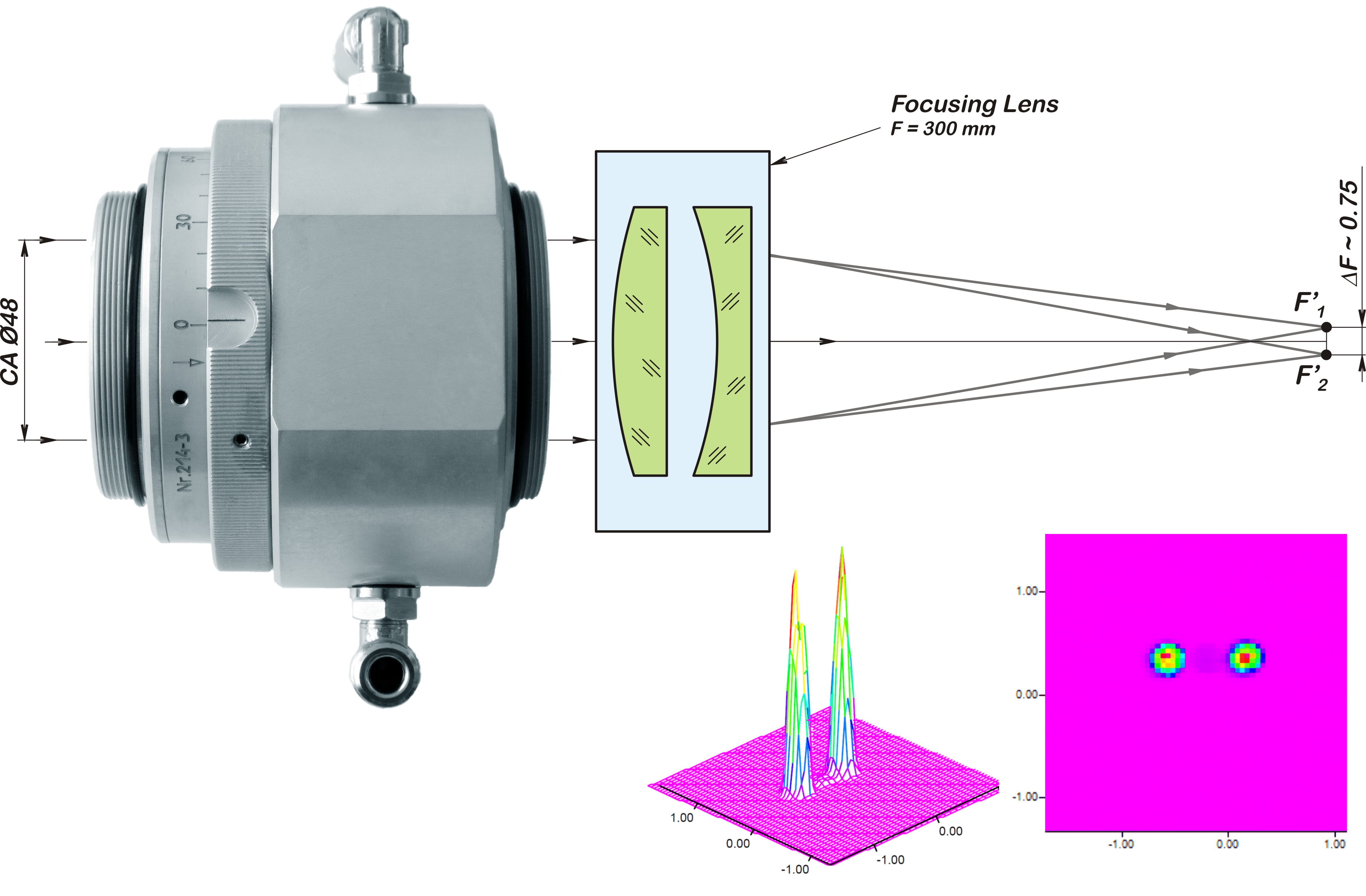 Powerful multimode fiber lasers, as well as fiber‑coupled solid-state and diode lasers, are widely used in industrial laser applications, and beam shaping of these multi-kW sources is of great importance to improve technologies like welding, metal sheet cutting, cladding, hardening. Due to physical properties of light propagation in multimode fibers, these sources are characterized by low spatial coherence resulting in high Beam Parameter Products (BPP) or M² (beam quality) values. The laser radiation emerging from a multimode fiber presents a mixture of wavefronts, therefore, when a resulting working spot has to be of <2 mm size the popular beam shaping methods like diffractive optical elements (DOE), refractive field mapping or integration type optics (homogenizers), cannot be used efficiently.

On the hand, imaging of a fiber end using a collimator and a focusing objective is a very robust and routinely used approach for beam delivery. Therefore, combining the imaging technique with laser beam splitting methods allows realizing the optical approach of beam shaping multimode lasers to vary intensity distributions in a working spot.

State of the art

Energy re-distribution perpendicular to the axis

Beam splitting perpendicular to the optical axis in two separate spots is shown in Fig. 1. A water cooled prismatic splitter is installed in the collimated beam in front of a focusing lens.

In the particular example, the focusing lens has focal length 300 mm, the splitting angle is 2.5 mrad, and hence the foci separation in this setup is 0.75 mm. In order to get separate spots a fiber with a smaller core diameter (200 µm) is applied. Shifting the working plane from the focus results in controlled overlap of spots and creating a combined elongated spot with “inverse-Gauss” intensity profile.

Beam splitting along the optical axis is realized using a water cooled focusing objective of patent pending design, Fig. 2. The objective provides 4 separate foci (F1, F2, F3, F4) with separation up to 11.1 mm, 48 mm clear aperture and 200 mm focal length are typical for industrial optics. Imaging of a multimode fiber end by the optical system composed from a collimator and this multi-focus objective results in separated fiber end images in several foci configurations with even energy distribution between foci:

Energy distribution behavior is defined by interaction of the different beam caustics; it is rather complicated but can be analyzed using a beam profile. Measurement results are shown in Fig. 2:

To split the beam and provide separate focused spots in the image plane there exist methods based on composing optical elements from parts, for example, a bendable mirror [10], or a lens from two parts with different curvature radii. A common disadvantage of these approaches is the junction between parts of the composed optical elements, which is a source of damage under high power laser radiation. Another approach is imaging of ends of separate but closely locating fibers [6, 8], however, such composed laser sources are not universal and usually customized for particular applications. A very promising approach is polarization splitting of laser energy. This allows avoiding any junctions in optical components, providing operation with usual laser sources and usual beam delivery components at easy integration in already existing optical systems. Because of features of light propagation in multimode fibers, the emerging radiation is practically unpolarized. Therefore, optical devices splitting polarization can be used to provide geometrical separation of focused spots and controlled splitting of the laser energy.

Energy re-distribution along the optical axis

This beam shaping approach is beneficial in thick metal sheet cutting [5, 11], deep penetration welding [12]. In welding applications, there is set a task of increased depth of field, which allows simplifying and stabilizing of a process realization. In the case of cutting applications, it is important to bring a portion of laser energy in depth of a workpiece in order to improve the cutting edge quality and to reach higher process efficiency [7, 11].

Splitting the laser energy and focusing in several foci separated along the optical axis is usually realized by DOE, for example, objective described in [13]. However, using DOE with powerful multimode lasers is questionable because of insufficient diffraction efficiency and low resistance to high power radiation.

Applying the refractive splitting approach allows overcoming these limitations and building almost lossless optics creating the required number of foci along the optical axis. These systems are capable to work with lasers of any mode structure, independent from the beam size, at power levels required in modern material processing technologies.